Wind energy is a pollution-free, never-ending form of energy. It doesn’t use fuel, it doesn’t produce greenhouse gasses, and it doesn’t create toxic or radioactive waste. It helps our country fulfill its demand for electric power, which is constantly growing, while helping lessen our dependence on fossil fuels.

Our power provider, Wisconsin Public Power Inc. (WPPI), understands this and is committed to demonstrating this by promoting renewable energy generation and the positive environmental impacts it provides. Wind power developer EcoEnergy of Madison, Wisconsin, has been working with WPPI and recently expressed interest in having a utility-sized wind turbine generator placed in River Falls. 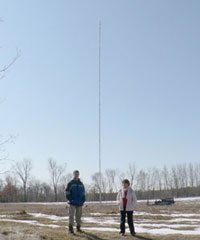 The first step in the approval process was being granted a height variance by the City of River Falls Board of Appeals on December 5, 2007. The next steps involved approval of the construction of a wind test tower by the Utility Commission on December 17, 2007, followed by City Council approval on January 8, 2008.

Now that those approvals were granted, EcoEnergy plans to erect a temporary wind test tower on the high ground south of Highland Drive, west of State Highway 35, near the Whitetail Ridge Industrial Park. The purpose of this 199-foot tower is to gather wind speed data that will be used to assess the feasibility of erecting a permanent wind turbine to power local businesses and homes.

In the event a favorable wind test study is received, EcoEnergy proposes to build a 400-foot, 1.5-megawatt permanent wind turbine, which represents the state of the art in wind turbine technology, estimated to produce around 4 million kilowatt-hours annually. If construction of a permanent tower proceeds, EcoEnergy will finance the cost of the project and in return, WPPI would enter into a long-term agreement to purchase back the output generation produced by the wind turbine.